David Bowie Made me Gay – In conversation with Darryl Bullock

In his 2017 title, David Bowie Made me Gay Darryl Bullock brought to light the colourful legacy that has shaped our musical and cultural landscape, revealing the inspiring and often heartbreaking stories of internationally renowned LGBT artists from Billie Holiday and Dusty Springfield to Frankie Goes to Hollywood and George Michael. To celebrate Pride, we caught up with the author himself. 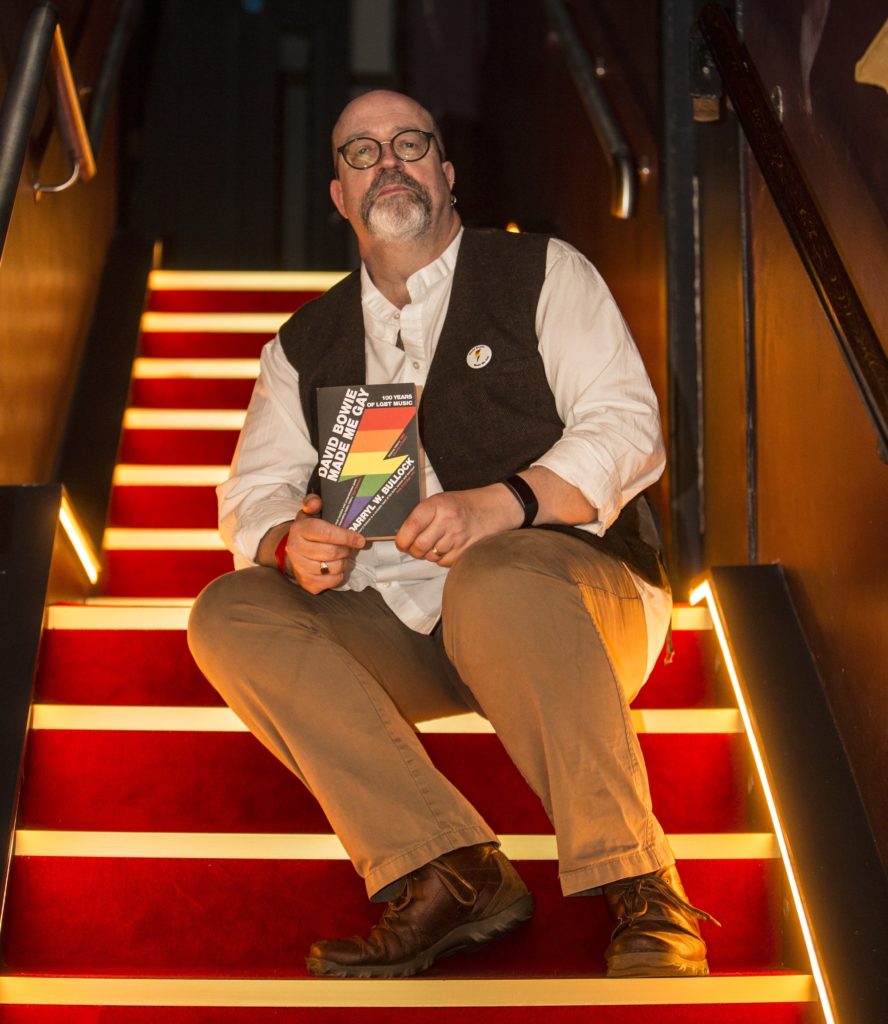 Where did you first encounter the likes of David Bowie and Freddie Mercury and at what point in your life did you begin to appreciate their influence on both LGBT+ and wider culture?

DB: I knew that I was gay from a very early age, and being obsessed with music I had been listening to David Bowie for as long as I can remember; he released his first single in the year that I was born. Watching Top of the Pops or in the early 1970s would have brought me in touch with glam artists, with Freddie Mercury and Queen (along with millions of others I bought ‘Bohemian Rhapsody’ in 1975 when I was just 11 years old), and by the time I was 16 I was working in a record shop and soaking up every influence imaginable.

Is there a particular show-stopping performance that encouraged you to question your own sexuality?

DB: Not really, but there was a defining moment when I realised that there was more to LGBT+ music, and therefore more to interest me, than show tunes and disco, and that was seeing Tom Robinson perform ‘Glad To Be Gay’, in a televised performance from The Secret Policeman’s Ball. Realising that you could be gay and angry and that you could stand up and shout about it was a revelation, and that one performance probably did more to shape my political awareness than any other. It definitely encouraged me to be more out and open about my own sexuality.

‘David Bowie Made Me Gay’ deals with a fixation on asserting binary labels to many musicians, Bowie for example. In what ways and outlets have these artists in history and in modern-day challenged this?

DB: Labels are important, in that they help an artist find an audience and help that audience to discover artists, but they can be restrictive. Audiences are pretty savvy and in this day and age, with the internet and social media, it is much easier for people to find their tribe and to discover their icons. The only thing that really holds them back is that mainstream media is still scared of change and many media outlets are still homo-, bi- and transphobic. Thanks to people like Sam Smith and Elliot Page that is slowly changing, but there is still so much to do. Bowie’s sexuality was fluid – he was straight, then gay, then bisexual and then straight again – but it was his ‘otherness’ that was most important, not the label he chose to use or people chose to hang on him. It was the act of being different that empowered the next generation of LGBT+ artists.

To what extent do you think that early stereotypes of gay men, in particular, have pigeonholed LGBT+ artists and musicians into genres? Is this something you think is as prevalent today as it was in say the 70s or 80s?

DB: I think in the pre-Bronski years we all thought that ‘gay’ music meant flouncy queens or disco, or perhaps both. Certainly up until the mid-80s, the only LGBT+ artists people saw in the mainstream were disco stars like The Village People or Sylvester. Glam rock was ‘queer’, encouraged playing with gender stereotypes, clothing and make-up, but very few people thought of acts like The Sweet or Mud as gay… they were more like the characters we saw on TV who were never out, they were constantly excused as effete mummy’s boys. Today artists are free to cross boundaries and genres: look at someone like John Grant, whose music stretches from piano ballads to hard EDM and everything in between.

When conducting your research were there any stories or truths that you found particularly shocking or interesting?

DB: There were certain things I couldn’t use for fear of being sued, but for me, the most interesting aspect was discovering the massive wealth of LGBT+ music in the years before the Stonewall riots. Out-LGBT+ artists have been making records for over 100 years now, yet we are constantly told that there was no LGBT+ life before Stonewall. The out jazz and blues artists of the 20s and 30s, especially queer Black women pioneers like Ma Rainey, Bessie Smith, Lucille Bogan and Alberta Hunter, left behind an incredible legacy.

Thanks to social media it is perhaps more discernible to evidence how LGBT+ artists are influencing various aspects of modern culture, however, your title more comprehensively chronicles this throughout the 20th century. Could you describe how early musical movements such as jazz and blues were received in the LGBT+ community and set a precedent?

DB: Those early decades were amazing times, and as I have already noted there were many women (and men) in jazz and blues making extraordinarily bold and outrageous records. Major cities had LGBT+ bars and clubs where people could play these recordings and share in the ribald humour, and people at home who did not have access to a gay bar or a lesbian club could still crank up the Victrola and play them. Much of the language is coded, but if you knew what you were listening to you would understand. Black artists could get away with more then perhaps because the mainstream did not treat blues with any respect: these were ‘race records’ designed to be marketed to African-American audiences and so of little interest outside of that community. The same went for jazz: it was always the white band leader that got the press. When bisexual Black singer Bessie Smith came along everything changed: her records sold in hundreds of thousands to both Black and white audiences. This emboldened other performers – and the club owners who saw that they could make a fast buck – and soon camp comedians, LGBT+ singers and drag acts could be seen in clubs, on stages and in films. Sadly all of this new openness was driven back underground by the Depression and by the encroaching war and it would take years before artists felt supported and powerful enough to come out again.

What is the significance of pride for you and has this changed over time?

DB: For me, the great value of Pride lies in its political roots: Pride began as a protest movement, with LGBT+ people demanding their civil rights, and sadly the majority of people who attended Pride events these days either do not know this or do not care. There is a feeling that we’ve won the day and none of that matters anymore, but tell that to queer kids in Jamaica, in the Middle East, in China, or in Kenya or in Russia. The fight goes on, and it has to continue until every LGBT+-identifying person can live their life without being afraid.

Are you doing anything to celebrate this year?

DB: I usually join the march here in Bristol: last year that couldn’t happen because of Covid, but I hope to be able to take part when Bride returns to the streets of the city on 10 July. I have also been invited to take part in some Pride-related online events this month for the MMF, a 1200-strong community of music managers, which I’m looking forward to. I’m sure I’ll find an excuse to wave a flag somewhere!

‘David Bowie Made Me Gay’ is available to buy here.