On the question of faith: The role of the Divine in The Maid of Gascony series

‘In hope there is love, in love there is grace, and in grace there is wisdom that surpasses all understanding..’

Ahead of the publication of the second book in the Maid of Gascony series, author Catherine Clover delves into the position of faith and divinity in charting the trials and tribulations of Lady Isabelle on her pilgrimage from Oxford to Rome.

When I first began work on The Templar’s Garden, I was in the final stages of my time living in Oxford as a graduate student. While preparing for my viva voce, the oral defense of my doctoral thesis, I came across an intriguing entry about Gascony in the Transactions of the Royal Historical Society (TRHS). Though I cannot remember all the particulars now, at the time it was striking enough to make me think it could form the basis of a fictional medieval family saga: The daughter of a noble Gascon family was kept prisoner in a tower by a wicked count following her unconsummated marriage; her parents, devastated upon hearing such news, sought papal intervention in order to save their daughter and free from her marriage contract; with her marriage annulled by the Pope and in receipt of her title and estates, the daughter was able to legally marry again and maintain her financial standing. Sound familiar?

I am often asked by readers, ‘just how much of The Maid of Gascony series is true’? Is it historically accurate? Did these people and their way of life really exist in the 1450s? My answer can only be summed up with the response: it’s a bit of both, actually.

First to address some of the truths. Yes, the Duchy of Gascony did exist until the Battle of Castillon. Yes, the English (and some Welsh) were in Gascony through the end of the English administration of the Duchy. Yes, Bazas is a real place, and yes, I did live there as a graduate student (and Père Francis was the priest whom I knew at the cathedral). Of the locations and characters who help bring colour and life to the words on the page, they are either A) real historical figures or B) characterizations based on individuals I have known in my lifetime (both good and bad).

Apart from the family residence in Gascony called Rosete (which is actually a combination of Harlech in Wales and a 14th-century papal residence called Villandraut, just outside Bazas), all the locations are very real.

So why make Lady Isabelle a mystic? Why bring God and theology into the series in the way that I have? As a medievalist, I believe that you cannot have a legitimate discussion or analysis of the period in which this story is set, and where its various locations are set, without bringing in aspects of mysticism and the Divine. Regardless of whether the reader is a spiritual person or not, I feel it is disingenuous to write about this time without including the role of the Church and how those in Europe, England, and Wales, related to it as an institution. It is a fact that for the average person living in the locations discussed, as well as the monarch and those in their court, the Church was the centre of their world in the fifteenth century. As the reader will note from what I outline in the series, the monastic hours, the monastic way of life, the presence of God; they were everywhere. The church bells rang, the nuns and priests and monks – those who sought or were in Holy Orders – were highly visible at this time in history. 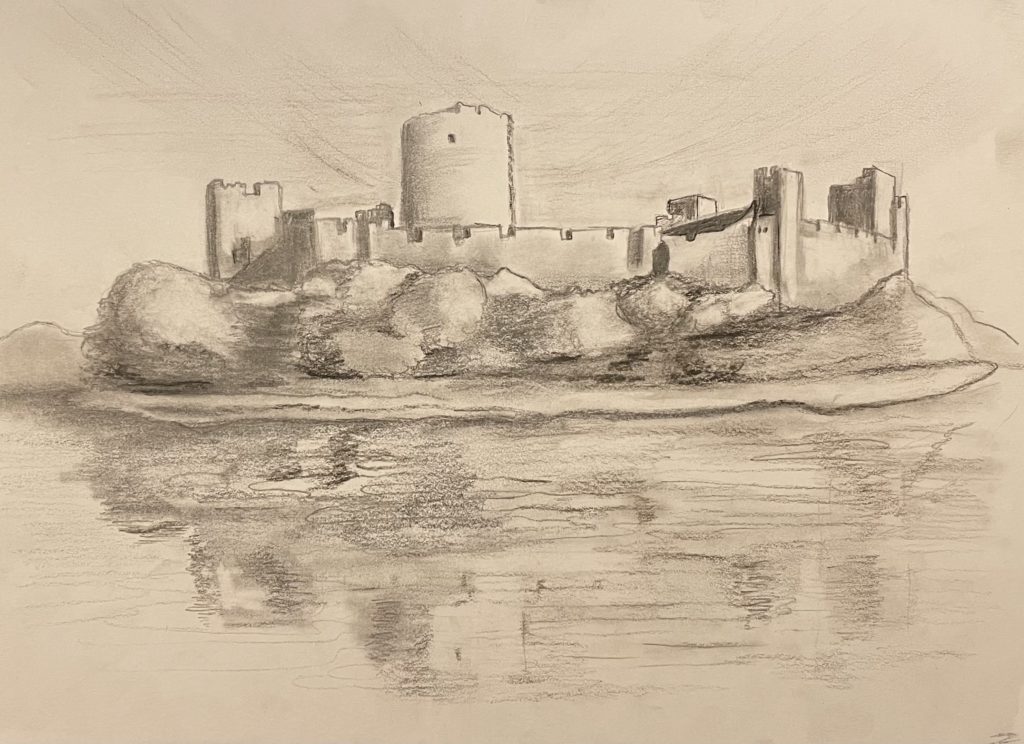 As the reader will also be aware if they have listened to the accompanying soundtrack to The Templar’s Garden entitled ‘Like as the Hart’, music, art, and poetry were all infused with Biblical themes. There were exceptions to this, of course, and the Italian Renaissance helped to usher in progressive changes that allowed for a vision of the world beyond the confines of theological doctrine and the Church in everyday life. But in my series, I want the reader to feel as though they are immersed in another world, both by means of the audio and visual senses, one that is set apart from how we are living today.

Likewise, the album(s) of music that accompany the books include recordings that will allow the reader to step back in time and hear how composers have addressed the very same themes I raise in the series in a musical format. ‘Like as the Hart’ does this very thing. It takes the reader through a number of choral interpretations of the same Biblical text, the words of Psalm 42:

‘Like as the hart desireth the water brooks, so longeth my soul after thee, O Lord’

These words are meaningful in the life of Lady Isabelle as she experiences trauma and despair at different parts of the story. The Psalmist describes the emotions that all humankind can relate; that the human condition is fraught with pain and suffering, but also experiences moments of elation and joy. Even today, the discipline of reading the Psalms is a significant part of daily Christian liturgy and formation.

Book two, Queen of Heaven, also has an album of choral music to accompany the text. The pandemic has slightly derailed its recording and production, but it will come. And when it does, it is my hope that the emotional content of the pieces I have selected will serve to further heighten the drama of the events the reader experiences throughout the narrative.

Perhaps the reader also might find it helpful to consider the series and its main character in the context that it was envisioned. Lady Isabelle, who is also called Isa, is still a child in book one. Her voice is that of an adolescent, not a mature adult; it mirrors her age not the age of the reader. Isa has never lived anywhere but within the safety of her family structure. When the reader first meets her, she is an awkward fourteen-year-old mystic, sheltered and naïve to the ways of the world and men. But she is observant. She is independent-minded, and she is just starting to see what God’s purpose is for her. In book two, Isa is far more mature. Gone is any awkwardness and hesitance; she has become more assertive and is a strong self-advocate. Yet everything she does and in every relationship that she has, she speaks of the Divine. As its title suggests, in Queen of Heaven, the voice of God is presented to Lady Isabelle through the Virgin Mary; through a female leader; as a mother. This, in itself, is not unique. Isa has read and studied the words of Mother Julian of Norwich; she knows of Julian’s visions and that Julian, too, has been witness to the female Divine.

So as not to disappoint, I must caution that readers of Queen of Heaven will not find within its pages heavy panting or heaving thrusting; it is definitely not what many call a bodice-ripper. But for readers who enjoy an adventure led by a strong and articulate female protagonist, with detailed glimpses of medieval life set across Europe, England and Wales, dotted with notable historical figures of the time – among them Marsilio Ficino, Edmund, and Jasper Tudor, Margaret Beaufort (mother of Henry VII), plus many more – including a window to the Divine, then Queen of Heaven should not disappoint.